Ive had lengthy conversations with a farmer living on Wuradjuri land around Orange in the central west of NSW. His father & grandfather were farmers in the conservationist mode as well. The 3 generations have acted as custodians of their land rather than conquerors.  This farmer also has a passion for scarred trees but is fascinated by stone artefacts and quarries & axe sharpening grooves as too. He has even purchased a block of land on the Bogan river to protect the CMTs and has been involved with the local community re protection and interpretation of the scarred trees. Like me the farmer, who prefers not to be identified, has had his share of ostracism re our interest in all things Indigenous. Ive copied a few lines from the  “Do it Anyway” poem promoted by Mother Teresa. It was written by Kent M. Keith as “Paradoxical Commandments

…. If you are kind, people may accuse you of selfish, ulterior motives;

….If you find serenity and happiness, they may be jealous;

The good you do today, people will often forget tomorrow;
Do good anyway.

You see, in the final analysis, it is between you and your God;

It was never between you and them anyway.

Just over 80% of NSW is agricultural land. The most common land use by area is grazing native vegetation, which occupies 355,400 square kilometres or 44.4 per cent of the state (ABARES 2016).  Unlike farming land which has most of the trees removed, grazing country ranges from selectively cleared to untouched depending on geographical, climatic & historical factors. The vast majority of our state’s Aboriginal heritage is owned or leased by graziers so both cooperation & conservation is needed. Dodgy native title claims & uncorroborated ‘sacred site’ declarations undermine trust between farmers & Aboriginal communities. So does lack of respect & racist attitudes that the rest of the country left behind last century.  Aboriginal access for bush tucker, fishing, cultural activities etc should be the norm amongst land owners not the exception – DO GOOD ANYWAY  …

The regular occurrence of TinTs & CMTinTs along the murrumanaarr paleo channel have become predictable with the help of google earth. The landscape seen from above showing the sandhills of the old river and the density of the trees makes the job of finding them relatively easy. If you measure the distance from our boundary (Goorie) to as far as Ive been in Tungra it is about 2.5 ks in a straight line & there are about 25 TinTs in that space. ( not including small peach bush suckered types ) Basically looking at a TinT every 100 meters on average. Again measuring the remaining sandhill type country to the big warrambool there is another 22.5 ks so possibly 225 more TinTs! I think there will be a lot less as the further you get from the European wells heading south the less density of TinTs. It will depend on the quality/ quantity of water in the native wells. Its likely the wells sanded up in drought. My father in law told me the well water here in the 1940s was very brackish so they put down a ground tank (dam) to improve the house water supply.

All this cumulative knowledge from The Biggest Estate on Earth: How Aborigines Made Australia (Bill Gammage) to Dark emu (Bruce Pascoe) down to the local Bush tucker, boomerangs & bandages: traditional Aboriginal plant use in the border rivers and Gwydir catchment / compiled by Michelle McKemey and Harry White – allows me to look on google earth & predict where I will find trees growing in other trees. From my smart phone to my laptop I download the GPS data from photographs Ive taken that week or month or whenever I get around to it. I then plot these TinTs on google earth & email them to Jen Silcock ( UQ rangeland ecologist ) in Charleville. This “geotagging” of photos is not new & Ive had issues with false data before due to the American differential but that’s too tedious to talk about. The point is that cumulative written knowledge and technology can help us recover lost oral traditions. There is no shame in not knowing but there is shame in not being willing to learn. 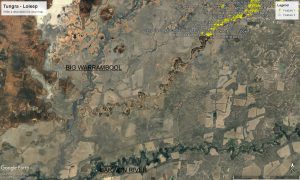 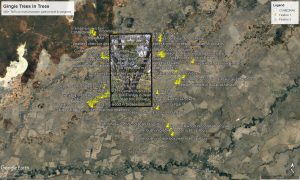