Raining here again so Im reading another interesting book and loading the new TinTs I found mustering in Avon recently. The book is called Sapiens a brief history of humankind by Yuval Noah Harari and its excellent reading if you are isolating with covid or something – ”70,000 years ago Homo sapiens was still an insignificant animal minding its own business in a corner of Africa. In the following millennia it transformed itself into the master of the entire planet & the terror of the ecosystem …” One of the ways we climbed to the top of the food chain, apart from tool making, was the use of fire. Fire was not just used for warmth & hunting but it also allowed us to cook. Cooking killed germs & parasites and made previously inedible foods like wheat & rice & potatoes digestible. “Even today …more than 90% of the calories that feed humanity come from the handful of plants that our ancestors domesticated between 9500 & 3500 BC.”

“Some scholars believe there is a direct link between the advent of cooking, the shortening of the human intestinal tract & the growth of the human brain. Since long intestines & large brains are both massive energy consumers its hard to have both”

Cows for example have intestines 20 X longer than their bodies and are not very bright! Its also thought that the Neanderthals & Denisovans actually had bigger brains than us but Sapiens had better social skills/ language & reasoning/ processing abilities. The really interesting part is that “There is some evidence that the size of the average Sapiens brain has actually decreased since the age of foraging”  WOO HOO  The author goes on to say “Ancient foragers also suffered less from infectious diseases. Most infectious diseases that have plagued agricultural & industrial societies (smallpox measles TB ) originated in domesticated animals & were transferred to humans only after the Agricultural revolution”

History is written by the victors apparently so its long been thought that the agricultural revolution was a big advance for humanity. Harari says “That tale is a fantasy. There is no evidence that people became more intelligent with time. Foragers (*hunter gatherers) knew the secrets of nature long before the Agricultural Revolution, since their survival depended on an intimate knowledge of the animals they hunted & the plants they gathered.” In what he sees as history’s biggest fraud Harari notes “We did not domesticate wheat. It domesticated us” Other evidence comes from Brandon Specktor at Live Science who writes – In a study published Jan. 26 in the journal Royal Society Open Science, researchers compared the cranial measurements (an indicator of brain size) of modern house cats with that of two of their closest wild ancestors, African (Felis lybica) and European wildcats (Felis silvestris). The team found that cranium size — and therefore brain size — in domesticated cats has shrunk significantly over the past 10,000 years or so compared with their wild ancestors. “Changes to cranial volume have been well documented across [domesticated] species, including sheep, rabbits, dogs and many more,” the researchers wrote.

Humans whether they were ‘foragers’ or ‘farmers’ or a mixture of both have always appreciated natures gifts. This is a type of native hibiscus I found growing profusely around the ‘house’ camp at Avon. 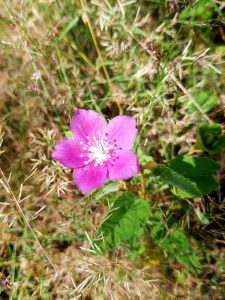 The flower is small compared to highly bred/ genetically manipulated types you see in coastal gardens. There are many exquisitely beautiful native plants but we are so used to the enormous European / Asian/ African flowers we don’t even notice what’s growing under our noses out in the paddocks. I’ll bet if there were Jacarandas, Japanese maples or ornamental cherry trees growing out of hollow eucalypts here people would take notice of the TinT phenomena?

When I email Jen Silcock pictures & google earth coordinates of TinTs I always tell her the camp they are growing. I sometimes describe the camp by a specific outstanding TinT or some other eye catching CMT. I wonder what the camp’s original owner/occupier’s knew the camps as?  Most of the paddock names here would be the original Gomeroi names but some have moved since the property was split into soldier settler blocks after the WW1 & 2. Avon for example was obviously not the Gomeroi name for the natural water catchment with the ancient coolabah. “Uncle” Ted Fields  (Garruu Gambuu) may have known the traditional name but its probably lost now. Telinebone paddock (4700 acres) is the original name used for the land around the wells. ‘Bone’ is place but what about ‘Teline’? The land system with the underground river was known as murrumanaarr (dragonfly) but the individual camps may have been known by the special trees. A couple of ks south east of the wells is a new camp (ie Ive only found it recently) I call Psydrax camp after the only Psydrax oleifolia TinT Ive ever found. The wild lemon is a medicinal plant used for respiratory complaints and I googled the following –

The genus Psydrax is one of the ethno-medicinally important genera of the Rubiaceae family which has only received a limited scientific attention, despite coming from a pharmacologically and phytochemically important plant family. The genus has found applications in ethnomedical management of diabetes, stomach disorders, inflammations, cardiovascular diseases, epilepsy, wounds, malaria and fever.( Linking phytochemistry to traditional uses and pharmacology of an underexplored genus – Psydrax: a review-Chukwudulue UM1, Attah AF2, Okoye FBC3) 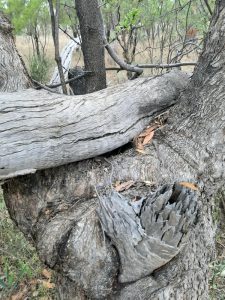 Its possible there is a conservation angle to having bush tucker/ medicine/ culturally important trees growing in old eucalypts. If there was a bad fire the scrub trees growing off the ground would be safer. These TinT guests could be used as a seed reservoir to recolonize the burnt areas. Eucalypts are fire adapted and many wattles are fire resistant. So are saltbush, emu bush & even rosewood if its not dried out. If there are conventionally growing scrub trees around the base of the box tree host they are often bigger than the guest. See the budda/ Eremophila mitchellii TinT here 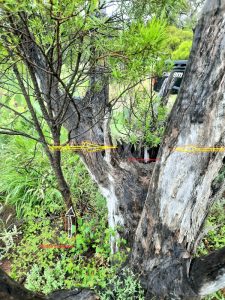 The ground growing budda is larger but is it older? This is very common with peach bush as well but mostly its because the ground growing peach bush & tree growing peach bush is the same plant. Peach bush seems to sucker into all the surrounding trees & pine stumps. So while it looks like the ground growing budda has dropped seeds into the old box tree crotch & a new budda tree has germinated there this is not necessarily so. The natural germination theory doesn’t explain why this sort of thing only happens around the Aboriginal camps. I have been poking wilga seeds into all sorts of places in the last few years but haven’t seen one grow yet.

Since finding more than a dozen new TinTs at the house camp & around the natural water catchment in Avon, the seemingly impossible wilga growing out of a leopardwood tree is looking more part of a pattern. How would they get a wilga tree to grow out of a solid leopardwood tree I hear you ask – with great difficulty I expect. 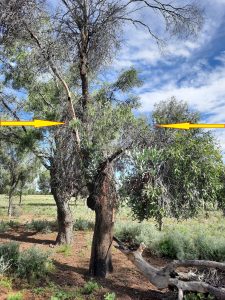 The other growth you can see in this pic below the arrows pointing to the wilga guest is the mistletoe infestation that is killing the host leopardwood. I wont be back to Avon for awhile as its destocked now but it will be fascinating to see what happens to this combo over time. Like in the much smaller water catchment a few ks away that used to be surrounded by 4 coolabah ringtrees but now has only 1 – whiteants are also destroying CMTs. Luckily I knew this water hole would be full as my dog Cubby overheated in the extreme humidity & I was a long way from the whitefella tanks/ dams. You can see the water hole in the background with the buggy behind it. 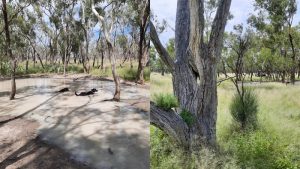 Not all cultural knowledge is lost here & I thank the ancestors often for their intelligence.