Out on Avon yesterday sampling Santalum lanceolatum aka wild plum or ngamumbirra berries which I find the yummiest of all the local bush tucker. I remember Freddie Walford picking some for the kids while we waited for the school bus years ago. The kids were pretty tentative & spat them out with much grimacing & exaggerated disgust. Freddie was hugely amused & promised to bring them plenty more. We all loved that man and he was the one that set me on this path of learning. It’s a slow accumulation of knowledge with each layer building on the previous ones. You cant understand this until you have grasped that & trees that meant nothing before I now know are highly significant 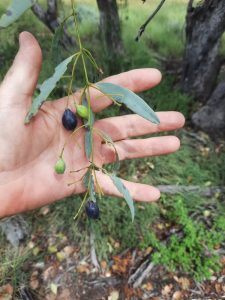 Allan Tighe, my friend & Gomeroi Elder, has also been a major source of information & inspiration. Some years ago now he gave me a book called Bush Tucker, Boomerangs & Bandages compiled by Dr Michelle McKemey  B.Sc. (Hons I), PhD (UNE) & Harry White Senior Strategic Land Services Officer – Aboriginal Communities, Northern Tablelands LLS. This book is why I know that wild plum/ sandalwood is called ngamumbirra in the yuwaala(r/y)aay language. Printed/ digital knowledge is convenient, accessible & preservable.  The only problem with this book is the trees/plants are from the Border rivers & Gwydir catchments so many west of Walgett species are not included. I also found a miljee aka nelia TinT at the Avon house camp yesterday and that tree is not found in this Bush Tucker bible. I know it’s an important medicine tree for this simple reason – Allan Tighe uses it. 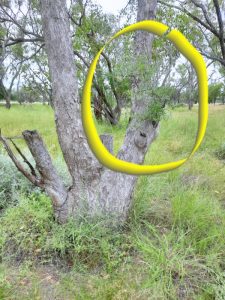 Unlike the campgrounds on murrumanaarr, there are no sedge or kidney weed carpets under huge eucalypts at this old Avon site but the medicinal trees have been there a long long time. Myoporum & Eremophila species in particular and the yellow berry bushes (denhamia cunninghamii) have grown into small trees. 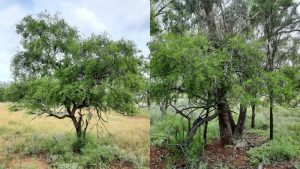 The Aboriginal camp & the soldier settler’s house at Avon are on the same sandy rise about 1 km from the natural water catchment. There are closer billabongs & gilgais but this would have originally been the only reliable water in drought. The mighty coolabah matriarch is still doing well on the catchment as you can see. 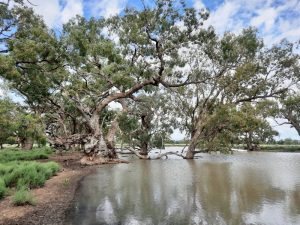 The other camp must-haves are the butter bush aka gumbie gumbie which is included in the Bush tucker bible & the wild lemon (Psydrax oleifolia) which isn’t. If you suspect a native tree or plant has aboriginal uses just google it & you can usually find information on it. If someone is selling the leaves on the internet then it will be used as medicine by some Aboriginal nation somewhere in Australia. Of course the good old peach bush (Ehretia membranifolia) is found at the Avon house camp & nearby sandhill as it is at every single other camp I can think of. Its sometimes known as weeping koda but if you google the scientific name my website comes up.  The ubiquitous wilga is there of course and one small example is weirdly growing out of the top of a dying leopardwood. Nepine & gargaloo drape the camp trees and the supplejacks grow monstrous in the sand. Wherever there are big old trees there is either underground water or a natural water catchment. No water No life. 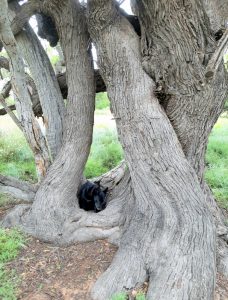 Speaking of water, 2022 has brought the best summer rain in years. All this water runs to the lowest spot & accumulates there. When that billabong overflows the water heads downhill to the next one & so on till it reaches the Barwon river. On our property water that cannot be taken up by the saturated soil runs north to south and these flow patterns become obvious after 5 “ of storm rain. Apart from water held up in ground tanks, table-drains and environmental ponding this flow is as it always has been. The landscape is configured in ways that make sense to me now. Coolabah & belah dominate the low swampy land but belar clumps have better drainage. Bimblebox hate having wet feet as does the wilga understory. You can see how the ‘super camps’ are situated to cope with the huge variation in seasonal conditions here. All the camps with more than a few TinTs are on well drained raised land or sandy pockets but have deep catchment billabongs close by.

Thousands of years of wisdom went into choosing the best mobile home sites without surveyors or building regulations. Surviving in difficult climates sharpens not just the physical characteristics of homo sapiens but make them pretty bloody smart too …