Late december brought temps In the high 30s and a dry electrical storm. The lighting struck in Myall which is a cropping paddock and the wheat stubble/ stalks caught alight. Only a few acres burnt because the Walgett fire brigade, our neighbour and our fencing contractors with the water truck put it out. La Nina years bring beautiful rain which grows bountiful crops & pastures but come summer all this growth gets baked into a fire pie. Ironically Walgett was also flooding at the time and all our access roads including paddock tracks were cut.

Christmas – New year saw the arrival of an unexpected guest in the form of a possum called Johnson ( Possum magic …magic Johnson ) It moved in amongst the suitcases on the western verandah & entertained everyone with its clothes line acrobatics. After xmas Johnson shifted into a cupboard on the cooler southern side with water views over the pool. 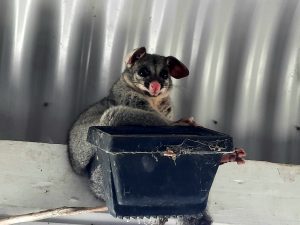 Allan Tighe has told me there are plenty of possums on the river but I have never seen one before & didn’t realise how cute they are close up. Johnson became very quiet very quickly but we never attempted to handle him. Apparently they carry a range of diseases & can scratch & bite if frightened. Im a sucker for small furry things but possums need native foods and their own kind so we left the verandah door propped open. Johnson took the hint & moved out but I suspect he doesn’t live that far away. Possums might be like TinTs – you only see them when you go looking for them? 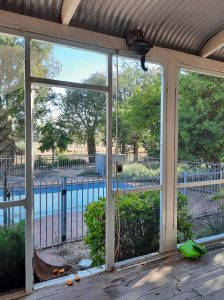 Native flora & fauna seem to be reclaiming territory all around me… perhaps it’s a reflection of my whats happening in my brain? Nut grass has demanded lawn space & wild jasmine is twining up the fruit trees. Thorny & climbing saltbush have taken over the gravel and invaded the garden beds. A thriving supplejack has totally smothered my bottle brush and the original quinine is taller than the house now. Old man saltbush is hedging the perimeter & emu bush has spread under the track & into the garden edges. Since the drought broke in 2020 the garden has flourished. We don’t run out of water now like in past droughts as we have an unlimited artesian supply – referred to as ‘bore water’. Many European plants don’t like the high alkalinity & mineral salts in bore water and are not as resilient as native vegetation. Time to bid the roses G’day perhaps?

The first bore on Moramana was put down in 1894 and accessed the Great Artesian basin (GAB) at a depth of 2089 ft/ 636 metres. The Gomeroi did not use bore water here obviously as it’s too far down. There are springs & seeps around the edges of the GAB in other places where the artesian water leaks out through fault lines in the rock. The permanent water in the wells here is from the old subterranean river. European style wells were put down along this ‘paleo-river’ in 1893, 1899, 1900 & 1902 to a depth of about 28 ft/ 8.5 metres. Wherever there are European wells there are preexisting Aboriginal wells & stands of remnant redgums (except the one at the house here). I have passed all this information onto the Dharriwaa Elders Group (DEG) and the UNSW hydrologists 3 years in a row but they still insist on testing the bore water from the GAB?

This is disappointing & frustrating as is trying to get any local Indig. interest in the TinTs. Here are 3 texts Ive sent over the last year or more to Wendy Spencer at the DEG that illustrate this: 21st Oct 2020;  … I hope you can get some process started to recognize these trees in trees (TinTs) Its just amazing what the people were doing at Murrumanaarr before they were ‘interrupted’ by the arrival of whitefellas. Maybe they were trying to crossbreed different species. Maybe they were just showing off their skills & the TinTs were reno’s or decoration? Possibly burials or unions as the guest & host trees would belong to different totems ? Whatever the reason they need to be recognised & protected. Better go, my sheep are heading in the wrong direction- hope the older blokes werent too tired, jane

13th Nov 2020;  Hi Wendy, seeing you at the veggie truck on Thurs. reminded me about  the TinTs (Trees in Trees) Did you get any consensus with Dharriwaa re what to do about them? Can you get them classified as CMTs? Does anyone know anything about them? It would be great to get some more local interest, maybe a catalogue of them. I know their GPS data & have photos of all l have seen. What do you think?

11th of Dec. 2021;  Wendy the bore/artesian water is not important. The subterranean water in the wells is . The Hydrologists have been here 3 times now & still havent tested the water the people used??? Dont bring them out here again to waste everyones time. They tested the boredrain tail out last year & sent me the report saying it was artesian water FFS – you can see the bloody boredrain running in .. l told them it was bore water …WTF – just bullshit. Why dont you get an Archaeologist to look at the trees in trees? They are single most important discovery in Aboriginal culture in years – the ancestors would be turning in their graves seeing the complete lack of interest shown by Dharriwaa. We need botanists or arborists or anthropologists or archaeologists not bloody Hydrologists who dont even bring a shovel? Get your priorities right Wendy. Walgett should be famous for these Cohabiting trees & you just sit on your hands? I cant understand it – the ancestors who lived here need to be credited & lauded for their skill. Why is that not happening?

If the Dharriwaa & the UNSW hydrologists have some conspiracy theory re artesian water & the NSW Dept of Primary Industry or Dept. of Planning Industry & Environment that’s fine. I can bring in all the bore water samples they want & they can test it till the cows come home. BTW you can get your bore water tested for free at these govt. agencies? – just go to their websites & fill out the online form. Why not put resources into researching what is actually here? If bush fires take out some old camps & TinTs this year we will lose all that cultural knowledge. Like Covid taking out the old people in the community because the anti-vaxxer fruitloops tell them the vaccines are unsafe. Don’t waste research dollars Wendy – discover the secrets of the Trees in Trees & honour the ancestors who created them. 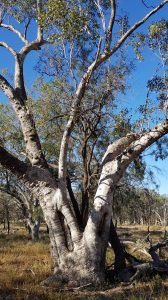 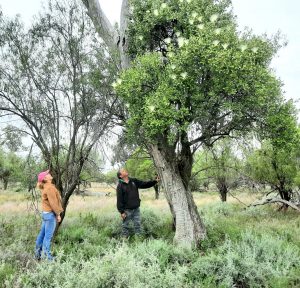 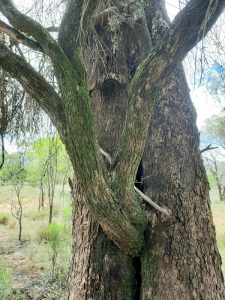