Ive been thinking a lot about these cohabitating trees lately and how they have managed to avoid detection for so long. People want proof to accept anything this outrageous but because of the nature of TinTs, proof is impossible. The host trees are almost always eucalypts and hollow so there is no way to age them scientifically. You can only estimate their age by their size. The guest trees are always solid but carbon dating is uncertain due to the nuclear testing here in the 1952 – 1963 that altered atmospheric carbon levels. “I will forewarn you that the carbon ratios for the calendar years between ~1600 AD and ~1955 AD are very overlapping. Human activity was putting “dead” or non-radioactive 12C into the atmosphere at an artificial rate.  So often the ratios calibrate to 5-7 calendar spans that range from the 1600s to the 50s.  If you expect that the trees are around 200 years old or so, that puts you smack in that era” –  Alyssa Tate, M.S. Director of Laboratory Operations.

The small 4 cm diameter quinine guest I sent to the U.S DirectAMS  came back with this ambiguous result;  CaliBomb estimates the material for D-AMS 039865 last incorporated carbon into the living tissue at the center of the quinine tree, practically speaking, in 2 distinct date ranges: cal AD 1958 – cal AD 1959 and cal AD 1995 – cal AD 2000.  Because atmospheric carbon ratios fluctuate, are not linear and were identical during those ranges, there is no means by which to distinguish between these eras utilizing radiocarbon dating on a single sample. 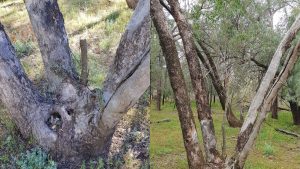 Ive also had a slab of cypress pine tested by UNSW (Turney, C., Becerra-Valdivia, L., Sookdeo, A., Thomas, Z.A., Palmer, J., Haines, H.A., Cadd, H., Wacker, L., Baker, A., Andersen, M.S., Jacobsen, G., Meredith, K., Chinu, K., Bollhalder, S., & Marjo, C. (2020). Radiocarbon Protocols and First Intercomparison Results from the Chronos 14Carbon-Cycle Facility, University of New South Wales, Sydney, Australia. Radiocarbon, 1-21. )  but again all they could tell me was this; – “Results basically show the spar wasn’t ‘old’.  The piece of wood most likely grew around the time period of 1870’s to 1930. As mentioned before, carbon dating for the past 200 or so years is not able to be very precise because the calibration curve is pretty flat so lots of possible time periods are identified.  The ‘dating tool’ is much better once you get something a little older.” Its not the age of the slab of cypress pine embedded 20 ft up in a remnant redgum thats important here guys – its location location location. Pointer/marker/direction trees showed the way & were an integral part of the songlines crisscrossing the landscape. 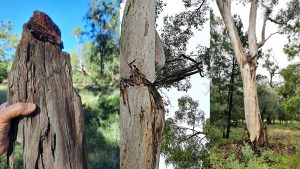 Having gone down the scientific path all I can do now is wait for a statistical analysis from QLD ecologist Jen Silcock re the probability of TinTs being a natural occurrence. Ideally she wants “To really underpin a solid scientific paper, I think we will need some transect data about the size of host trees and density of CMTs on Gingie, plus some more searches in other areas to show where TinTs occur and where they don’t” The problem, ie apart from the Qld border, is lack of support. The only ones interested in the TinTs beside Jen & her partner Russell Fairfax are Allo & I. We both are still working most days – Allan Tighe is 65 & the average lifespan for Aboriginal men is 71.6. I’m 59 but my husband is 9 years older & looking to retire. We are running out of time here guys so I ask any Botanists Anthropologists Archaeologists Aboriginal academics once again… COME & SEE THE TREES BEFORE ITS TOO LATE – future access cannot be guaranteed.

On the non-scientific/ non-academic front, this week has brought me face 2 scarface with some game changing CMTinTS. I have created a new gallery for these & am going thru my ordinary TinTs pics to find the scarred ones. Technically most of the TinTs are ‘culturally modified’ as the stumps they grow out of, or emerge next to, have been cut down with stone axes. However many stumps are cut with steel axes and there doesnt seem much correlation between axe type & size of guest. One of the many mysteries of TinTs that will probably remain just that. Since I have encountered so little interest from Australia’s academics black or white I tend to err on the side of caution. See the collage below 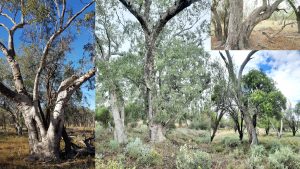 Do you still think these astonishing trees are the result of budgerigar’s bowel movements? Is a cockatoo’s cloaca responsible for these exquisite botanical marvels? So much for academic & journalistic freedom in this country – the freedom to deny our Aboriginal ancestors the veneration they deserve because you can’t be bothered driving to Walgett?

These spectacular trees haven’t come out of the blue – Bill Gammage & Bruce Pascoe have laid the foundations of possibility. Just what did the ancestors get up to, how much have we lost & can we get it back?  Apart from the spiritual aspect just think about the sustainability of this practice. As the old eucalypts fail the native scrub guests take over or they both continue to thrive for hundreds of years. TinTs are not recognised or protected as Culturally Modified Trees in NSW and CMTs are being cleared in Vic to build dual carriageways. Our ABC that should be representing Indigenous issues won’t even reply to my emails. The local Dharriwaa Elders Group (DEG) have got some funding for a full time ranger now so that’s a step forward. Below is a collage from last sunday showing Celeste Russell, a local nurse, having the language of the trees interpreted by Gomeroi Elder Allan Tighe. “You have a right to be present. A right to attend. A right to be astonished.” The Overstory – Richard Powers. 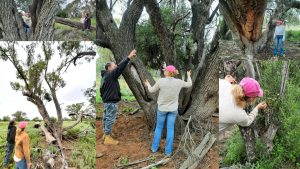