Im reading an intriguing novel by Richard Powers called “The Overstory” about remnant old growth forest in the US & the people involved in trying to save it. Im only halfway through but have come across some fascinating research into how trees communicate both above & below ground. Although the tree species are different over there, it’s the interconnectedness of all the life forms that’s the important thing … “There are no individuals in a forest, no separable events. The bird and the branch it sits on are a joint thing. A third or more of the food a big tree makes may go to feed other organisms. Even different kinds of trees form partnerships.” If this is so for seemingly unrelated trees – what are the implications for cohabitating trees ie TinTs

How did the world’s indigenous people fit into this scheme and what of the rainforest tribes in the Amazon today? The author goes on to speculate …”How it may take centuries to learn as much about trees as people once knew”.  Ringtrees & other manipulated hardwoods take considerable time and many generations of upkeep to create. Like this this centurion coolabah ringtree I found on the eastern boundary of Avon last Sunday- 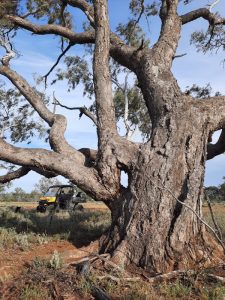 . It’s a similar size the old matriarch on the natural water catchment a few ks away and could be 500 yrs old. When the Gomeroi people first tied those sapling branches together did they envision what the tree would look like 20 generations later? This ringtree is near the back tank on Avon so the area was also a natural catch. It lines up with the coolabah with the branch bow a few Ks west . Allan graded the tank drains some years ago so the main tank & silt tank are now full to the brim.

Another interesting idea in “The Overstory” concerns ‘giving trees’. “Before it dies, a Douglas-fir, half a millennium old, will send its storehouse of chemicals back down into it roots and out through its fungal partners, donating its riches to the community pool in a last will and testament. We might well call these ancient benefactors giving trees”. The idea of guest trees getting nutritional help & protection from their hosts here is not so strange but what do the eucalypts get in return? What if any symbiosis is occurring ie is there some chemical/ fungal interaction? The box/ wilga combo is very common and I can see when wilgas occupy the middle section of the TinT their long vertical leaves would funnel rainwater down onto the root zone of the host.

Something Ive always found odd is the way native trees cluster together. Im told this is caused by birds sitting in the branches and passing/ pooping seeds onto the ground.  However the usual suspects involved in tree clumps here have winged seeds and are wind dispersed – whitewoods ( Atalaya hemiglauca ) & leopardwoods  ( Flindersia maculate ) Supplejack ( Ventilago viminalis ) Other bird or emu dispersed trees also clump as this rosewood ( Alectryon oleifolius ) & currant bush ( Apophyllum anomalum ) shows. Question – when is a TinT not a TinT Answer – when it’s a TarT (Tree around Tree). 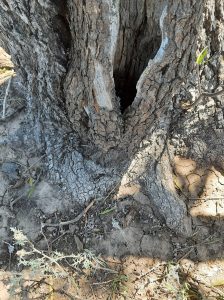 So why do all these Australian natives thrive when living close together. When I was planting trees in the garden years ago I always allowed plenty of space between them so they weren’t competing for light/ nutrients/ water. I should have looked over the garden fence … when in Rome do as the Romans do perhaps.

I think unusual or heavily modified trees were used to navigate by more so than the stars in the arid interior. Ringtrees here showed where the water could be found and TinTs showed the camps. Travelers didn’t just stop anywhere & camp on other people’s country. They had paths that were right of ways also known as songlines. The songs were lullabies with repetitive lyrics containing basic directions. These ancient routes were like the English common system, more an ‘everymans’ land than a ‘no-mans’ land. Navigating by the stars would be OK in well watered areas but out here your directions would need to be more specific or your clan could perish. If you clik on this link https://youtu.be/Bh5kHTBr0gU  you can why its not possible to use a moving star as a reference point for long journeys like travelling on foot up & down & across eastern Oz.

Important cultural trees were known not just by the locals. When Katie Langloh Parker was writing about the people at Bangate station on the Narran near Goodooga over a century ago she revealed this. “At Weetalibah was the tree from which Byamee cut the first Gayandi. This tree was burnt by travellers a few years ago. The blacks were furious: the sacred tree of Byamee burnt by the white devils!” Weetaliba is about 400 ks away from Bangate but the locals knew of that special tree & its destruction. How many of these centurion landmark or directional trees are still around? A lot more than you think & enough to recreate songlines here. Its not the lack of sentinel trees it’s the lack of institutional interest..