I had a very interesting email from my friend & rangeland ecologist, Jen Silcock last week. Jen found these black wattle TinTs on the Dunkeld Golf Course south of Mitchell on the Maranoa in southern Qld. She writes “Both guests were Acacia salicina, both really large (one about 30cm diameter, the other much bigger but impossible to measure due to its intertwining lower trunks), one growing in an apparent stone-axe cut stump (or maybe just a fallen branch, hard to tell as it was a long time ago whatever happened). The other was in a hollow created by a huge coolamon scar, I think. As usual with TinTs, the photos really don’t do them justice. They are special trees.” 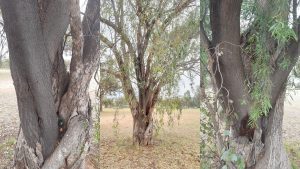 Bloody oath they are special trees and only 100 mts or so apart with many scarred trees and a sandy levee adjacent to the river. This would be a camp of the Gunggari people & their choice of guest(s) in the old box trees is also interesting. The Black wattle aka dhulan is common here in the sand hills but Ive never seen it growing in another tree.  So I did what I always do ie consult the bush tucker bible for Nth West NSW. This small book is hard to get hold of apparently but as a reference for native scrub trees & plants around here it is gold. I am in email contact with one of the compilers, Michelle McKemey, & I hope to get her help re the basic biology of TinTs. Or anybody’s help really? No Indig. academics or public figures will answer my emails so you need to ask why? 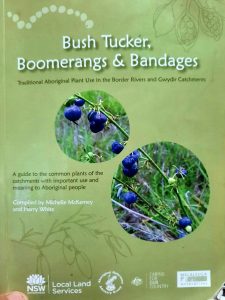 So the dhulan’s bark has a toxic component that when crushed and thrown in a waterhole it stuns the fish & causes them to float to the surface ( don’t try this at home haha ) Also the ash from burnt dhulan could be mixed with Pituri to create a narcotic that was widely traded. This leads me to speculate that the TinTs could have practical/ commercial values as well as spiritual ones. So I wrote down all the guest & all the non-guest local tree species living in eucalypts & found the guest list was more than twice as long. See what you think:

As a footnote to these lists I will add the shrubs that are found growing in box trees as well & they are all important for food or medicinal purposes. I am not saying these shrubs/ bushes were PLANTED by Aboriginal people I am simply listing what I see….ie guest shrubs from most common to least – Thorny saltbush (Rhagodia spinescens) Climbing saltbush (Rhagodia nutans) Shrubby riceflower (Pimelea microcephala) Nepine (Capparis lasiantha) Prickly fan flower (Scaevola spinescens) Lignum (Muehlenbeckia florulenta)  There are also grasses & introduced pest species that inhabit the crotches of old eucalypts incl. mimosa & prickly pear but I have only ever seen 1 of each of those.

What we really need to know is why some species flourish as TinTs & some species dont. Do some species need more water when young? Are their root systems unsuitable to being confined within a eucalypt? What are the intrinsic botanical differences between the guests & the non guests? Only 1 out of the 4 local acacia species grow as guests & the only 1 that does (Milgee – Acacia oswaldii) is very rare. The Eremophilas are also divided between those that do & those that dont. The wild lemon (Psydrax oleifolia) is one of the trees here often found in association with Aboriginal camps but I had never seen it growing as a guest until very recently. There is also only one leafless cherry – Exocarpos aphyllus.  Butterbush or gumbie gumbie (Pittosporum angustifolium) is also found around the camps, is culturally important and does grow well in eucalypts. Why is this so? Both these trees are listed in this publication –Constable, J. & Love, K. (2015) Aboriginal water values Maranoa-Balonne-Condamine subregion (Qld), a report for the Bioregional Assessment Programme. Psydrax oleifolia is known as Lemon Myrtle in this report & is listed as a medicinal plant for respiratory illness. Pittosporum angustifolium is called Umbie Umbie by the Gunggari and is used for a range of medicinal purposes as it is in NSW. If you want to know more about the Aboriginal people of the Maranoa-Balonne-Condamine area including the Gunggari you should follow this up.

There will be many more Trees in Trees in southern Qld & I expect Jen Silcock to find others soon. Also small wilga, rosewood, butter bush and emu bush look quite similar and I could have easily misidentified some guests. The guest list may grow so watch this space – or better still go out & watch the trees…