The Gomeroi altered trees here in ways that are hard to understand now. They seemed to like circles & curves but I don’t think that was just for the aesthetic/ ornamental appearance of the trees. We know Aboriginal people navigated by the stars at night but how did they find their way by day? Im not talking about the ‘locals’ who lived here at murrumanaarr but the thousands of travelers that came to the Narran Lakes for ‘festivals’ / gatherings. Ive talked about signage & symbols before but this is another level – lets talk about navigation from place to place when you are relying on songlines sung to you in your childhood not GPS satnav in your car… 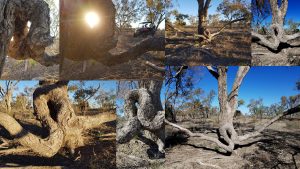 Even to the ‘untrained’ eye this coolabah looks weird but the art of making trees produce a shoot/ branch where you need one has been practiced by orchardists for many years. Obviously the Gomeroi here were all over it as well. Firstly they would give the tree a good wack just above where you want a branch. Some years later this new shoot was carefully divided & encouraged to grow in separate directions – in this case Nth/Sth. Many years after this the 2 ‘man made’ branches have been brought back together & tied with grass rope or animal sinew. The branches have then been separated again leaving a big wooden bow almost at ground level. The time frame for all this unknown.

Now what was intended with this ‘manipulation’ may be different than what the old coolabah looks like now. When you look through the ‘ring’ in mid-June  (winter solstice) you can see the setting sun completely outlined. This points to the natural water catchment a few ks away where all the leopardwood ringtrees are. This natural catchment is also where Rhonda Ashby remembers being taken as a child with her family by Ted Fields(snr). So we know it’s a reliable water hole & possibly a ‘sacred’ place.

So when Allan & I were poking about in Priest paddock the other day – as we are wont to do – we found a slab of timber at another special place. 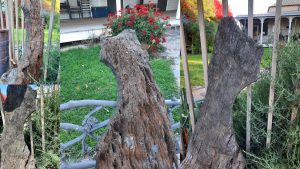 There are 2 curved edges here but the main one forms a beautifully smooth arc. This arc edge has been carefully burnt & seemingly rubbed to get this consistently curving side. Whenever I see strange wooden objects in the paddocks (mostly CMTs) I try to imagine any possible old agricultural uses. My family have been graziers ie pastoralists (ranchers)  for generations + I have the manager’s diaries of Gingie (my husband’s family property) from the 1880s. The closest ‘whitefella’ use for this slab of timber would be a milking cow bail or a yoke for a bullock team? I don’t think this is a possibility because it seems to be part of an old stump and milking cows & bullocks wouldn’t be happily/ historically attached to trees .Allan & I are pretty sure it’s a blackfella thing. Any suggestions anyone?

So the reason I got excited over this slab of wood lying in the dirt under some trees in the paddock is that I’ve seen that burnt curved edge before. Ive seen that rubbed burnt circular shape out in our southern most paddock but the stump is still intact and rooted in the ground. 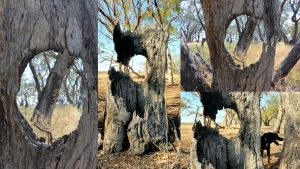 Now I haven’t driven a bullock team (Im 59 not 159) but I have milked cows manually as a child (ie by squeezing their teats so the milk streamed into a steel bucket which the cows occasionally kicked over or shat in). This hole in the tree stump doesn’t have any farming purpose I know of so it must have Aboriginal origins. Again any ideas are welcome but not in this sarcastic manner “Maybe the hole is a portal to the lost kingdom of Arthur?”. Im a curious open minded farmer not a keyboard warrior from the culture wars so dont bring your rubbish onto my website OK

As to the culture wars played out in the media between people who seem to love argument & abuse… don’t they have anything else to do with their time?  I stay well away from social media but sometimes follow the debate about Bruce Pascoe & his contentious ‘Dark emu’ on skynews. Bruce stayed here some years back & is very popular with the local Indig community. I don’t care about his genetics or his poetic license with the explorer’s journals but he has lifted the self-esteem of many aboriginal people. We cant move on as a country unless we come to terms with & acknowledge the past. Bruce has brought out the best & worst in us – people like me have created websites & the ‘trolls’ have had a field day. In his own words, he has “encouraged many Australians to recognise the ingenuity and sophistication of the many Aboriginal cultures, societies and land-management practices, which had not previously been brought to mainstream attention”

Pride in your race & your place is not a part of new ‘woke’ agenda. Most farmers & aboriginal people have always known what it is to be connected to the land. Internet trolls would have no idea where their food comes from and enjoy putting shit on other people so they can feel better about their own miserable existence. There has been a lot of genetic mixing in the last 140 years or so and will be for the foreseeable so get over it? If an indigenous couple from any country adopts an african or asian or european child & brings it up in their culture – how should that child be regarded? I think if Bruce has been heavily involved with & has been accepted by aboriginal people for half his life he should be regarded as aboriginal. If you don’t agree that’s fine but he is always welcome here …