Just because Aborigines used stone tools & weapons does not make them ‘stone age’ people. Just as hunter gatherers aren’t ‘cavemen’. This ongoing debate about whether pre 1788 Australians were nomadic or settled misses the point. Some people may have lived in villages and ‘farmed’ eels or fish & some may have grown native grasses & planted yams. Others may have moved around more between their seasonal camps or taken advantage of storms on previously burnt areas to follow the game across their land. Aboriginal people are modern humans (homo sapiens) with the same DNA, same capacities & same abilities as any other race of people. Those who say they are not are simply racists, always have been & always will be.

One thing humans do differently to animals is to grieve & memorialise their dead. Our ability to reason lets us imagine life after death & think about supernatural beings. Some cultures sacrificed animals/ slaves/ children to appease the gods while others built monuments to them. The way societies dispose of dead bodies & the rituals around grieving are unique as well. Some years ago now Allan showed me a ground coolamon like an arch shape scar that signified the death of a baby. Awhile after that he pointed out a tree with a ground coolamon & with a small coolamon above it. This signified a birthing tragedy where both the mother and baby died. Last week Allan pointed to a small very deep coolamon on its own and said it showed the death of a child.

It seems the people here have always used trees to display loss. Planting seeds/seedlings in the crotches of eucalypts when someone died is just an extension of that tradition. Because this practice is not a widespread one & there are examples of naturally occurring TinTs, amateur anthropologists & archaeologists dismiss any evidence of permanent living areas as ‘revisionist’. Ever since Bruce Pascoe set a cat among the pigeons by daring to suggest Aboriginal people led more settled lives than is generally thought there has been a big dummy spit in the academic community. Im not interested in scholarly dummy spits & dust ups. I just hang out when Allan Tighe when we get a spare day & upload what we see.

The main issue botanists have with the idea that TinTs are cultural is that the guests are often small. If they are small logically it follows they are not very old, but there are other biological factors here. Ive taken this information from the ANPSA -Australian native Plants Society (Aust.)  “Some seeds have a physical or chemical inhibitor to germination designed so that the seed will only germinate in natural habitats when conditions are favourable. In some cases the inhibitor can be overcome by pre-treatment of the seed before sowing but with others, successful germination has defied all attempts.”

These pre-treatments include high heat – using fire or boiling water, abrasion, stratification & smoke. The second reason the guest trees are small is that they are competing with the host tree for nutrients, water & sunlight. Trees don’t grow well until they have their roots sorted as anyone who has tried to grow citrus trees in clay can tell you. The guest tree has to get its roots established “INSIDE” another tree which is a big ask in our climate.

The other factor that makes the guest plant small is dieback caused by drought or grazing animals. The picture below shows this; 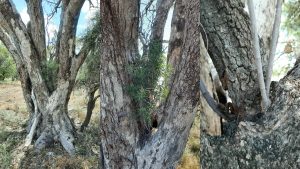 From the distance this rosewood in box TinT looks like a small guest in a large host as is the usual way. However when you get closer you can see the main trunk of the rosewood is dead and it has regrown around the base. In the next 10 years the dead trunk will fall out & all that remains will be the reshoot making the guest rosewood appear younger than it really is. How often has this happened over the years? How can the rosewood’s age be estimated? It cant…Ive tried.

Trees in other trees don’t mean the people here lived at the camps permanently as ‘caretakers’ but someone would have had to water them initially? Wouldn’t the clan(s) need to regularly visit & water the guests in summer at least until they were established? Allan has no information on this and there may never be any but if I have to debunk the birdshit theory one more time I will scream. Out with Allan last week we came across this dual occupancy TinT – 1 smallish boxtree  2 guests – rosewood & wilga appearing to be of similar age.

In this particular area there are 2 big wilgas ( approx. 1 metre circumference trunks) in stumps 20 mtrs apart. Also 2 very big peach bush TinTs closer together & 2 quinine TinTs also close. All these + numerous small TinTs (mostly wilga) are within about 1 k radius. This area is crisscrossed with firebreaks due to invasive cypress pine so much is lost unfortunately , but so much is still here. If you want to see these TinTs or the Gomeroi camps you need to contact Allo or me. We wont be here forever …. 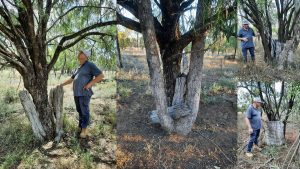