April is a very busy month here especially in wet years. The cultivation paddocks have to be prepared for sowing and livestock need to be moved back to the grazing paddocks so they don’t eat the emerging crop. Autumn lambs need marking, weeds need spraying, last year’s lambs need trucking, calves need weaning, roads need repair, fences need fixing …etc. Not all work no play as Easter also saw some guests who came to photograph & paint the CMTs. Kirsten Jeffcoat 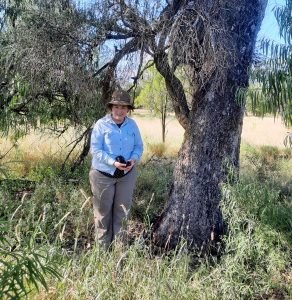 https://kirstenjeffcoat.mypixieset.com/  spent a few days here sketching trees & cooking lovely meals – somehow the 2 skills seem to go hand in hand and she’s spent 17 years in France cultivating both. Kirsten also has contacts in the National museum in Canberra and in archaeological/ anthropological circles who may help with preservation of the cross hatched bark slab.  A friend of hers, Matthew Taylor is another scartree fancier who also stayed a night & shared his insights. He has come across some very interesting trees & cultural spots in the Goulburn district and like me finds these spaces set you on what I would call a path of discovery rather than a learning curve. The CMTs are the teachers – speechless but communicable if that makes sense?

Speaking of visitors, Allan Tighe brought car loads out from the Narran lakes cultural camp out to see the scarred trees & a couple of the more 2wheel drive accessible TinTs. Some of the people had been before but for the majority it was a real eye opener. Aboriginal people and their fellow travelers seem to instinctively recognize the TinTs as the work of the ancestors while academics search for any other possible explanation. So much reverence & respect is paid to the artefacts/ CMTs/ smoking ceremonies etc it’s a joy to witness. For some of the Indig visitors who dont get the chance to reconnect with country like this the emotion was evident on their faces. Whatever happens here in the future re aboriginal run tourism I hope there will always be free access to Indigenous Australians – as is their birthright.

Jen Silcock & Russell Fairfax also called in on their whirlwind TinT tracking tour. They have been scouring the Bimble box / Poplar box dominant sclerophyll forests of southern Qld & northern NSW for TinTs to complete the puzzle. TinTs are very rare in the mulga lands between Cunnamulla & Charleville apparently but they found some on the paleochannels up between Mungindi & Collarenebri . We will have wait till Jen publishes her research to get a better picture. Jen’s partner Russell Fairfax tells me Kurrajong is the most common guest in the drier Mulga lands & Black/ Sally wattle more likely in wetter country. Ive seen neither of these as guests – Kurrajong I can understand as there is only 1 tree left here but there is plenty of Black wattle aka Acacia salicina. The density of TinTs here may be related to the density of scarred, lopped & shaped eucalypts in general ie the guest trees have more places to grow. The eucalypt crotches are the cradles for the guest seedlings – unmodified single trunk trees have far fewer. 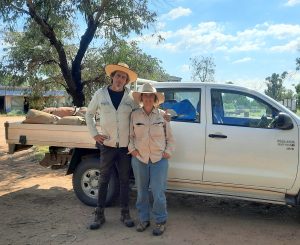 There was also a remarkable Indig wood artist from Lightning ridge who came to see the slab of cross hatched bark last week. I’ve spoken to Darryl Ferguson a few times about the scarred trees here and he has visited before. Darryl says that any trees associated with the dead would not be near the Aboriginal camps. This is what Ive noticed with the 3 spectacular CMTinTs (memorial trees) on the eastern side of the 1st big Telinebone sandhill. 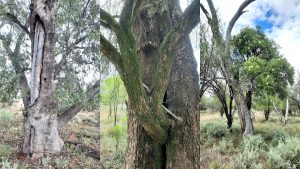 There are no camps with nutgrass or kidney weed in that location or any other typical camp vegetation. There are some huge outstanding scarred trees & other ordinary TinTs but no peach bush clusters nearby. The dominant understory is Eurah aka Eremophila  bignoniiflora  but many of the coolabah are poisoned so not a pristine site as such. The important thing is that these 3 heavily scarred memorial trees are in the same vicinity and each is impressive in its own right –  but the 3 together make it a probable burial ground or memorial place. Its also possible bones were interred in these trees, if so they will remain as is. There is no scientific or cultural reason to disturb these places only academic curiosity – and that doesn’t exist in this country anymore…. 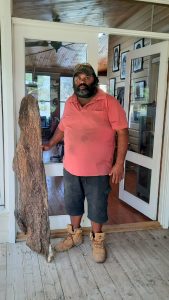 Here is a photo of Darryl with the cross hatched bark slab I found at the psydrax camp in the 2nd sandhill in Telinebone. Kirsten has suggested I show it to a wood conservator or specialized curator at the National museum in Canberra. I’ve already taken 3 pieces of wood down to BEES at UNSW – the slice of quinine guest they dismissed as only about 20 years old. To quote the Dendro- chronologist Jonathan Palmer “I’ve got the radiocarbon dating result from Waikato Uni for the Quinine tree sample you sent to me.  I’ve attached the results certificate.  It shows the probable age of the tree was 1998-1999 (85%). There is also a slim chance the tree started growing in 1958/9 (2%).  So, basically the radiocarbon result to me says the tree was c.21 years old.

I sent another slice of the same Quinine guest to the U.S and received different results. They said there was a 50% chance the little tree was over 60 yrs old. 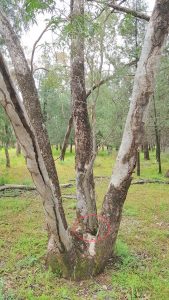 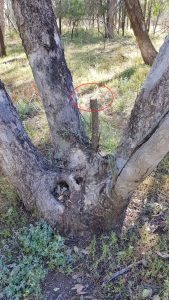 “CaliBomb estimates the material for D-AMS 039865 last incorporated carbon into the living tissue at the center of the quinine tree, practically speaking, in 2 distinct date ranges: cal AD 1958 – cal AD 1959 and cal AD 1995 – cal AD 2000.  Because atmospheric carbon ratios fluctuate, are not linear and were identical during those ranges, there is no means by which to distinguish between these eras utilizing radiocarbon dating on a single sample.” You may wonder why its important how old the quinine guest was? Aboriginal people were still living and working here until the 1960s so its possible they were responsible for the quinine. They were not living here from 1995 to 2000.

Another piece of wood I had tested was a pine wedge that was embedded in a redgum at the Telinebone wells about 5 meters up the trunk. This is what I received via Jen Silcock (apparently BEES @ UNSW can’t send technical stuff to farmers as they are too stupid to understand it) – “Results basically show the spar wasn’t ‘old’.  The piece of wood most likely grew around the time period of 1870’s to 1930. As mentioned before, carbon dating for the past 200 or so years is not able to be very precise because the calibration curve is pretty flat so lots of possible time periods are identified.  The ‘dating tool’ is much better once you get something a little older. 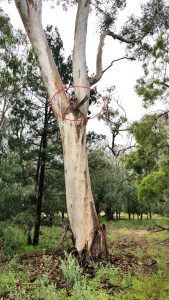 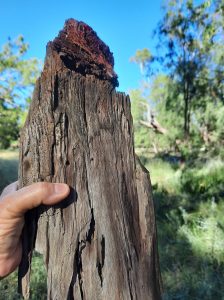 Again a big age range – 90 to 150 years old. It’s not the age that’s important here, it’s where the pine ‘spar’ was located. Pine branches don’t grow on redgums – who inserted it & why? No follow up forthcoming from UNSW…

This biscuit of whitewood I took down to UNSW in Jan 2020 is still languishing at BEES – school of Biological Earth & Environmental Science. 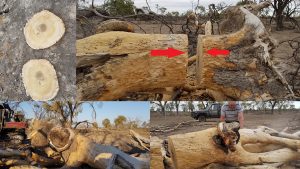 I no longer have the time or motivation to chase it up to see if I can get it dated. Radio carbon dating is inaccurate & expensive & none of the academics involved are the slightest bit interested in the trees here. Walgett is not on their list of engrossing places to visit. Indigenous academics won’t help, even one that came from Walgett doesn’t answer my emails. The cross hatched bark slab shown in this collage will remain here. If any academics or museums want to see it they can contact me or Darryl Ferguson the PIC (person in charge)  0458 216 045. 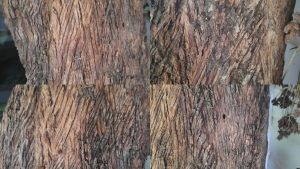