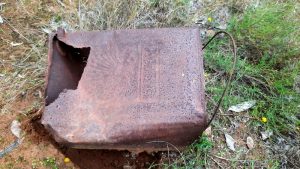 Since spending time hanging around old Aboriginal camps Ive noticed what is known as ‘post contact artefacts’. Mostly old kerosene tins with thick wire handles for carting water. Wooden coolamons, as useful as they were for carrying stuff, could not compete with the kero tin for durability and carry-ability. Tobacco tins, tin cans, horse shoes/nails etc were also refashioned but these items are smaller & harder to find. Steel axes replaced stone ones and wire or rope substituted for twine made from sinew or rolled reeds & grasses. Aussies are known for their quick uptake of new technologies seems like our first Australians were too.

Ive been in contact with Mike Bremers a canoeist & coauthor of “Murray-Darling Journeys” (Two hundred years of significant rowing and paddling journeys on the rivers of the Murray-Darling Basin: 1817 to 2016) He has taken the most extraordinary photos of ringtrees & other CMTs along our rivers & a few inland areas as well.https://www.murraydarlingjourneys.id.au/home/scar-and-ring-trees   https://www.murraydarlingjourneys.id.au/home/scar-and-ring-trees  River redgum rings have no equal – some are quite convoluted & complicated while some are just huge. Check out the “ A “ shaped 2 tree creation located on the Darling between Brewarrina & Tilpa. Ive seen a few multiple rings here 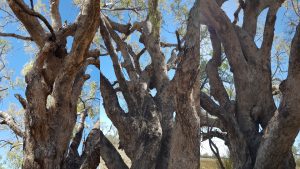 like this one on a neighbouring property I call the 3 ringed circus, but Mike Bremer’s river ringtrees take the cake.

Given the waterlogged state of the northwest Ive only been out on new country a couple of times. Recently on wailwun land I stumbled across a bush I’d never seen before – Solanum ferocissimum or spiny potato bush. It grabbed me – literally –  by the pants and then a little further on I found the same thing growing as a guest in a blackbox. I mean what are the chances? Neither my husband nor sister recognized the spiny shrub so I sent a photo to Jen Silcock who identified it straight away. This is the third unknown plant Ive found growing as a guest that Jen has had to identify for me & each has known Aboriginal uses.

Spiny potato bush is a source of solasodine, which is used to make steroidal hormones into contraceptives. Aside from its hormonal activity, solasodine appears to display pharmacological effects, including antifungal and anticancer behaviour (Patel et al., 2013). 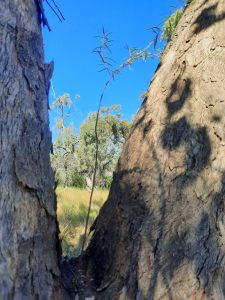 Another bush Ive found on wailwun country in the past is the Prickly fanflower or Scaevola spinescens. This shrub has bigger spikes and is found in central Australia as well.  “A root infusion was drunk to treat stomach ache and urinary complaints. A decoction of the stems was drunk to treat sores and boils. The entire plant was burned and the fumes inhaled to treat colds” – from tasteaustralia.biz/bushfood/bush-remedies 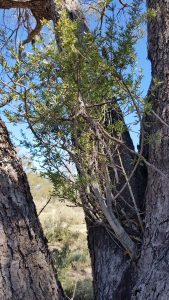 The other strange guest is peppercress which used to be widespread according to Plants of Western New South Wales GM Cunningham, WE Mulham, PL Milthorpe, JH Leigh.  However to quote  https://grasslands.ecolinc.vic.edu.au/fieldguide/flora/basalt-pepper-cress “This endangered plant produces glucosinolate compounds which may have benefits as a natural pesticide, in addition to nutritional, therapeutic and prophylactic properties. All Lepidium are anti-scorbutic. The leaf and stems of Lepidium species were used by Aboriginal peoples as a food source, steaming them as a green.” 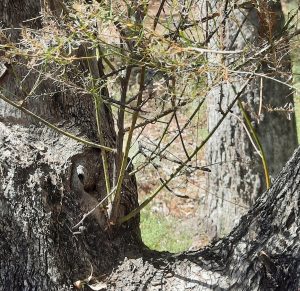 Im looking further along the paleo channel now in the neighbours’ neighbour’s place. I have found a big box CMTinT (now called ‘memorial trees’ in the archives) but that will have to wait for next blog. This tree also has a ring and the old scar has been cut into leaving visible marks to insert a bumble tree. You may wonder how I just seem to stumble across these extraordinarily manipulated trees that are more artform than vegetation? It comes down to the most basic common denominator of life – water. Reliable water is scarce in arid zones away from the rivers. People camped at these waters over very long periods of time & left their marks. Without rocks to engrave on or cliffs & caves to paint on the people here wrought their cultural symbols on trees. If you know where the water is found both above & below ground you know where the camps will be. If you know where the old camps are you will find the manipulated trees – simple.

Old camps have old trees many of which were planted by the ancestors I think. Not all the scars are still visible as even the long suffering bimble box closes up over time. Most of these closed scars are found at the oldest camps 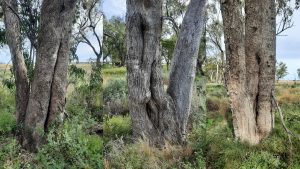 Burnt scars don’t close like this because too much heartwood is destroyed. Ringtrees also heal over time until they are no longer noticeable. 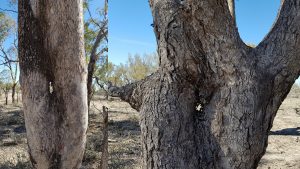 The loss of my favourite CMTs through natural attrition causes me grief but some can be resurrected. Scartree rescue is challenging but rewarding … 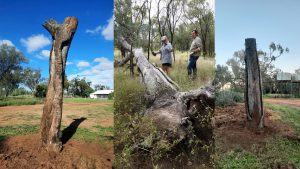 For this gift on my 60th birthday I thank my son Harry & my good friend Allan Tighe. May she last another 500 years ..