As the lockdown wears on its not all doom & gloom out here. Walgett has made great progress re vaccination rates & the cases you hear on the news are Dubbo people with Walgett addresses. Progress hasn’t been so good with my quest to have the state library of NSW preserve this website in perpetuity (ie for the foreseeable future). They have a very slick website & under the banner

GATHER – Connecting Aboriginal communities with collections and stories from the State Library of NSW.

comes the acknowledgement to the Gadigal & this quote “We celebrate the diversity of Aboriginal cultures and languages across NSW.” As far as I know the Gomeroi/ Gomileraay/ Kamilaroi are the 2nd biggest nation in NSW after the Wiradjuri. Much of the Gomeroi culture involved bark removal , wood removal & metaphysical removal in the sense that trees helped one get to the sky camp after death. Memorials to the departed in the form of trees planted in other trees is the most recent example of spiritual enlightenment of the people here.  “ I herd from this area from the old people planted new tree when someone important was born in tribes and in dead parts of tree’s when some person pass on”  Allan Tighe 2021. If you think OUR state library should preserve this website for future generations you need to contact them and tell them so. Put in this link https://gather.sl.nsw.gov.au/  Then scroll down to where it says contact us & clik on that

There is something about the wilga tree that lets it grow in the most unlikely places. Wilga is used to smoke the dead here but their seeds are difficult to germinate. Heating the branches to get smoke may encourage seed germination & as they were flung around a bit the seeds may be wedged in unlikely places? Here is a mature Ironwood tree (Acacia excelsa) with a wilga growing out of it 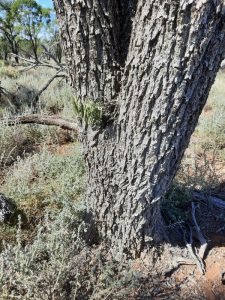 I think someone whacked into the ironwood with a stone axe & pushed wilga seeds or plant material in. Ironwood as the name suggests is very very hard. The wilga is only small but it’s woody and given its living between hell & a hard place I think it would grow very slowly – stop start dieback repeat for a century

Wilgas also live in belah trees on the odd occasion – in this case the unbroken section of the belah slopes away so the well-worn hypothesis of birds sitting on a high branch & shitting seeds in the tree’s crotch falls apart. This leaves the fly-by bird shitting possibility which must have occurred in squadrons regularly over Aboriginal camps to account for all the TinTs? Like marsupials & reptiles I would have thought there would be a scarcity of birdlife around the camps due to the increased likelihood of them getting eaten? 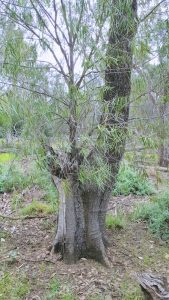 This wilga growing in a dying leopardwood out around the Avon natural water catchment was a delight for me & Jen Silcock & Russell Fairfax but I suspect 2 yr old Rowan was somewhat underwhelmed. Ive written about the Avon water catchment before – it has a lot of Ringtrees mostly leopardwood & the oldest coolabah matriarch you have ever seen. Its genuineness as a significant camp was reinforced by Rhonda Ashby who remembered being taken there with her family by Ted Fields (Snr). She was probably underwhelmed by trees as a child like Rowan I suspect! 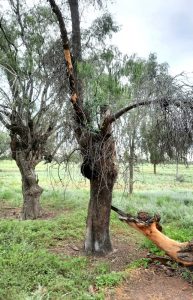 I think this wilga has been alive in the leopardwood for some time but has only started to thrive now the host is dying. There is only so much water & light & nutrient to go around & the wilga just seems to be able to wait it out. These camps are not ‘sacred sites’ they are simply semi-permanent living areas…with all the necessary requirements for life – good water – sandy soil in a hollow – timbered with all the edibles & medicinals esp. peach bush quinine & Parsonsia eucalyptophylla. There will be a carpet of Dichondra & sedge & a nearby gilgai system with Nardoo. The big old box trees will be scarred from bark sheet removal for roofing & most of the coolabahs bent over. There is such a feeling of home in these places still & an intangible sense of human presence.

The only sacred/ ceremonial sites around here I think are places where the big eucalypts – coolabahs & bimblebox – are burnt from the inside. I think there has been ceremonies at these places where smoke & flames would have issued forth from the hollow trunks & branches looking pretty bloody awesome. Im not sure we had set Bora grounds either because you would need to have plenty of food & water for all the visitors & obviously that would depend on the season. In this matter I defer to Ted Fields Snr who was looking for a Ngiyambaa Bora ground here back in 2002 .  Bora grounds may have moved around depending on ‘baby booms’ within clans & their territories. Murrumanaarr was not like the Narran Lakes & Brewarrina fish traps that had thousands gathering annually as the food supply is guaranteed.

Please contact the SLNSW State Library of NSW & let them know you want this website to remain as is for your children & grandchildren. Im not selling it – there is no money to be made – but this very important part of our Australian culture needs to survive so we can both learn from the past & value it. Cheers