Yaama to all visitors to this site – yaama being the Gomeroi word for hello. For those who’ve only just googled their way here in NAIDOC week, I hope you like the thousands of CMTs you can see. Culturally Modified Tree is the term used now for trees whose bark has been removed or trunks/branches have been shaped for various purposes by Aboriginal people a century or more ago. There is some debate & difficulty in recognising CMTs today because trees change over time and we don’t really know how long they live. The older most eucalypts get the hollower they become so new techniques like carbon dating for aging trees works for solid trees only. The inside of a eucalypt – logically the oldest part is long gone leaving empty space or termite casings or strangely enough sometimes the roots of other trees…

There is a whole lot of discussion going on atm about what sort of lifestyle Aboriginal people had in this country before European settlement. Some academics like Bruce Pascoe believe there was more of a sedentary farming lifestyle than we had previously thought. Others like Peter Sutton refute this and say pre 1788, hunter gathering was the way Australia fed itself. I expect there were exceptions & differences depending on region & season. This is how modern Aust. agriculture works today. In a semi arid region like this you would be mad to think you could survive on cropping alone. Even the irrigators up stream of Walgett grew very little cotton in 2019. You need to be flexible as a farmer these days or you would be dead broke. Pre 1788 you would just be dead.

This is where the Trees in Trees come into the discussion. If the guest trees were deliberately planted in the crotches or crevices or stumps of hollow eucalypts around the camps, they would need to be watered. How much & for how long they would need nurturing would depend on seasonal conditions and type of guest. Allan Tighe has information suggesting the trees in trees were created in memorial for someone important who had died. If this is the case then perhaps they were watered for the whole grieving period? I expect many guests trees have died over time but this cultural practice does point to a more settled life style here than we assumed in the past.

What worries me about the Aboriginal farming debate is not just its politicisation but the either/ or academic approach.  Why is a mostly nomadic lifestyle considered inferior to a mostly settled one anyway? Why would a lifestyle suited to the desert lands of central Australia also suit those living in high rainfall resource rich places like the Lockyer valley or S/W Vic? What happens to the not-so -mobile? Aboriginal people are well known for their respect for their elders & their love of their infants – did they just leave them behind? If you had broken your leg falling out of a tree were you abandoned when the night sky told the clan it was time to follow the songlines – I think not.  When we talk about the ancient Greeks or traditional Japanese culture we dont mean they all did this or they all did that. Why do we use such a broad brush approach to the first Australians ???

Speaking of Japan, I came across the practice of “daisugi” which is growing more trees out of existing trees to produce higher quality & quantity timber. https://www.openculture.com/2020/10/daisugi.html  Johnny Waldman (Spoon & Tamago) says “Written as 台杉 and literally meaning platform cedar, the technique resulted in a tree that resembled an open palm with multiple trees growing out if it, perfectly vertical,” . This method of producing wood that is ”140% as flexible as standard cedar and 200% as dense/strong,” involves pruning the tree severely then removing most of the reshoots so only the strongest & straightest remain. Apparently these daisugi trees are “ marvelled at around the world 600 years later” The TinTs here are marvelled at by 1, studied by 2 & seen by less than a dozen. What does that say about us as a nation do you think? 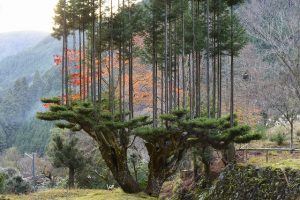 To end on a positive note, some good things have happened in the last month or so. I have found an Australian web site designer named Martin through codeable so no longer have to battle with Crazy Domains. They couldn’t get their heads around photo heavy philanthropic sites & I couldn’t get my head around the tech speak like ‘innode’ & ‘pagination’. Also just yesterday after whingeing for months about the lack of academic interest in the trees, I emailed Peter Sutton the main author of “Farmers or Hunter gatherers?” – the dark emu debate, and to my surprise he replied. That elevates him into the elite level of academics and authors like Bill Gammage, Bruce Pascoe & Paul Forster who also respond. The ecologists Jen Silcock & Russell Fairfax are coming back for some more tree hugging next month and I don’t use that term to disparagingly. When they are measuring trees they wrap their arms around them with a dress makers tape to record the circumference – sweet!

Another interested party is the State library of NSW where Richard Neville is seeing what can be done about preserving scartrees.com into the future and I thank Darby for bringing the site to his attention. Some years ago I purchased copies of photos taken here in the 1880s from the Fulton collection held by the SLNSW & had them enlarged & framed. I think the mob should have access to the works of their ancestors as we do of ours in our state library. I have built a database of CMTs & I want the descendants and kin of the Aboriginal people of this area to access these generations into the future. Like the galvanised iron shed over the old wool wagon here I want to build a digital shed over the top of the CMTs on this property. You never know, one day Australians may appreciate it …..